I need help identifying a shrub, how best to shape/prune it, and when. Please see the attached photo (right). It's about four feet tall and the goal is two feet. - M.R. -

(This article has been Sponsored by one with that same question...)

That's a mop false cypress. Could be the green variety, or one of the gold forms (they don't develop much color in shade).

Cut it back as you would a juniper. That means you can cut as far down as there is green within -- falsecypress does not bud out readily from leafless wood. 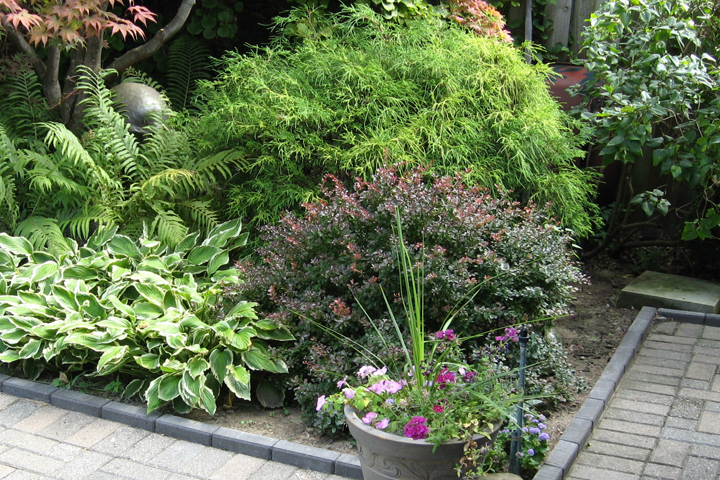 The green shaggy critter in the background is a dwarf threadleaf falsecypress (Chamaecyparis pisifera, perhaps the gold-tone variety 'Mops'). Tame it as described here or give it room to grow to about 10' tall and 6' feet wide. (Photo © M.R. 2012 c/o GardenAtoZ.com)

When we want a plant to respond with lots of new growth, as in this case, we prune shortly before budbreak in spring. That capitalizes on the plants' natural growth cycle and is also good for us in this case. We mean, we're less likely to be fired because people tend to forget each spring which plants' twigs should be bare, and which leafy. Thus they overlook what we've cut back. By the time they take notice and wonder "what happened," the delay in growth our cuts imposed, is ending and the plant's leafing out all over.

That said, you can cut these plants at any time. 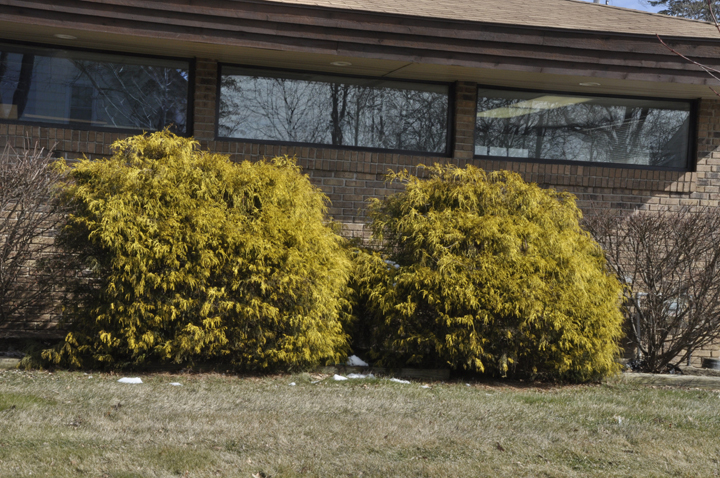 This plant truly is a dwarf compared to its parent species. The parent, called the Sawara falsecypress, can top 100'. However, that doesn't mean the dwarf is small in human terms. These two 'Mops' are close to 5' tall and nowhere near done growing. To keep such a plant small, and shaggy, and gold, and healthy is do-able but takes thinking. If the plants are already overgrown or unhealthy (as in deep shade) it also requires some guts, to make the first cuts. 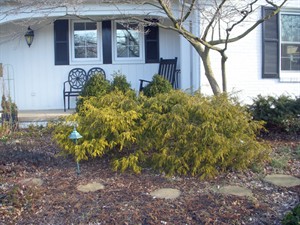 These two plants are also the dwarf variety 'Mops' but we've been keeping them small by cutting them every year or two, in August, as we describe here.

Here's the whole story in photos. We recently declared a group of that falsecypress variety to be rehabilitated, after following the regime for two years that we're describing here for you. 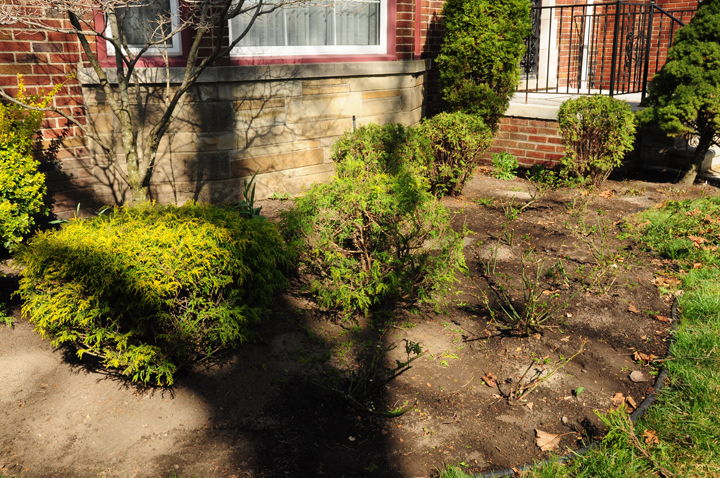 Here are the shrubs two years ago in early April -- three gold mop falsecypresses in the foreground, three dwarf globe arborvitaes beyond. The same pruning techniques apply to both. We've already begun pruning, so the falsecypress in the center of the frame has already been pruned; moments before, it looked like the one in the lower left corner. But we'll come back to that. (Please pardon shadows and perspective shifts in this sequence. As gardeners first, reporters second we must work when the work needs doing, shoot when we can, and leave it to luck to put together a series like this. This time, the angles shift and the lighting was more often good for gardening than for photography, but the process and progression are both visible.)

These shrubs have lost their laciness and natural roundness to repeated shearing, which also caused all foliage to become concentrated at the top of weak branches. Our goal was to keep them small but improve the shape, texture and foliage density -- which will keep them healthier, too. 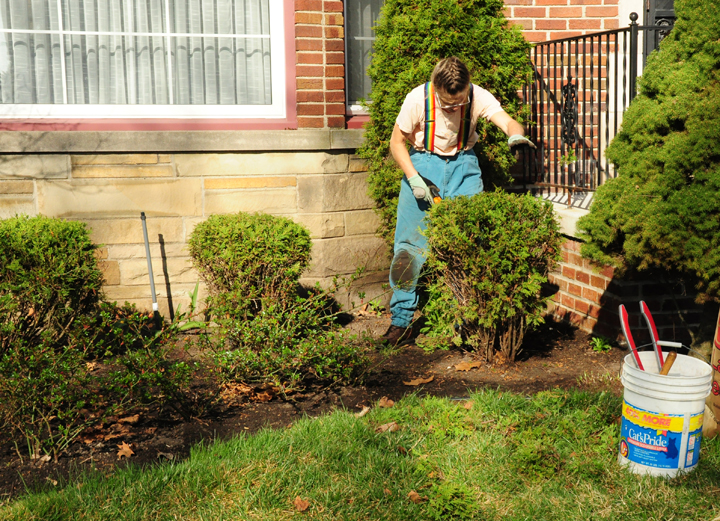 Look for it on the arb to the left of Janet and you can see the twigs are belted with string.

Beginning density is the limiter

We start by checking how far into the interior there is new leafy growth. (To see that look illustrated: We've just done this on a dwarf blue spruce, another plant pruned the same way. We will probably have added that photo by now to Dwarf cut to size.) On species that don't break from old wood, density is our limiter. These plants worried us, as their interior growth was pretty weak. Yet given the options 'cut and see', or 'take them out and start over,' cutting was our choice.

Next, we cut everything down and in to the desired, minus a bit to allow for the year's growth.

Then, cut to promote growth deeper within the plant. Cut about half the branches far enough back to give each cut limb one or two years to grow before it reaches the point where you'll cut it again. Reach in along each branch and cut to just above a side branch with decent foliage. If there is no greenery on a given branch that deep into the plant, then cut that branch all the way out of the picture.

Comparing the next two photos: The more drastic the reduction, the more noticeable the change will be in the first year. Pretty scary here, huh? However, those that need the hardest cut also need to be done sooner rather than later. 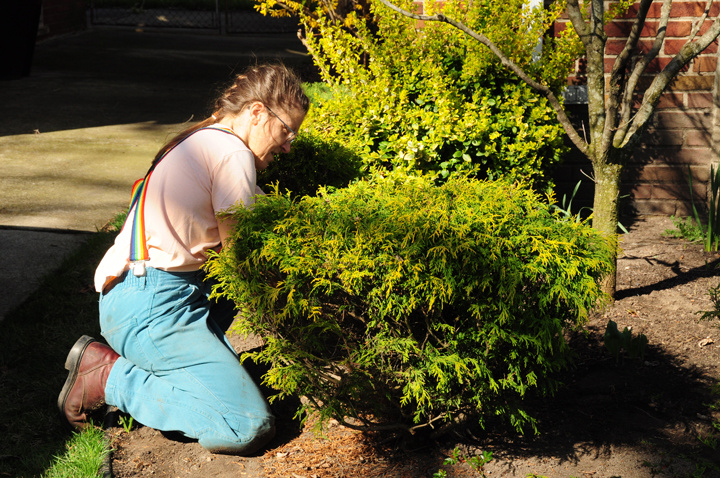 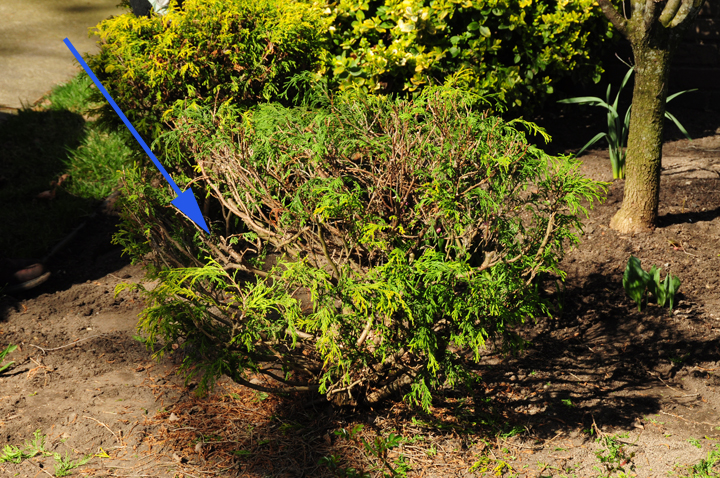 Above, and enlarged below: The arrow points to one of the branches Janet's cut back by a couple years' growth. 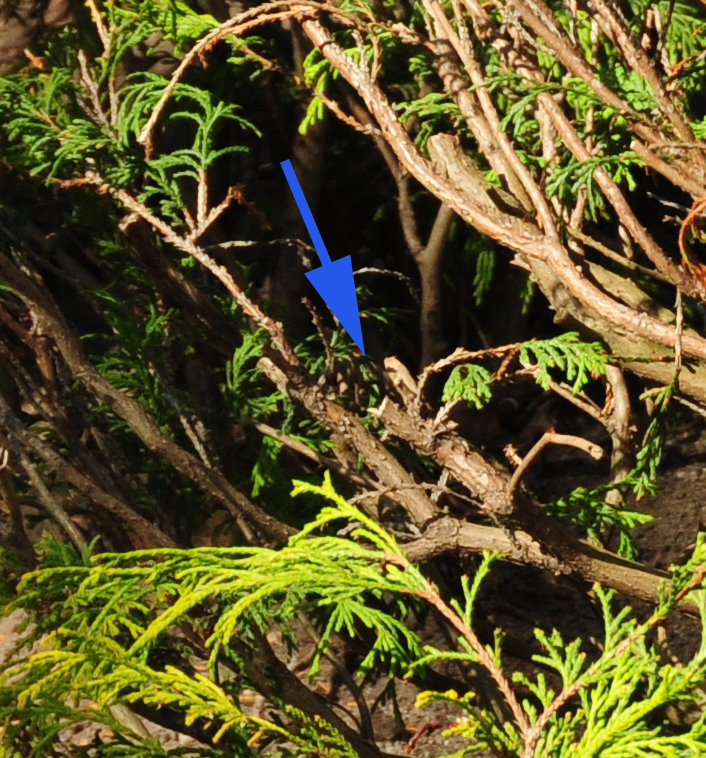 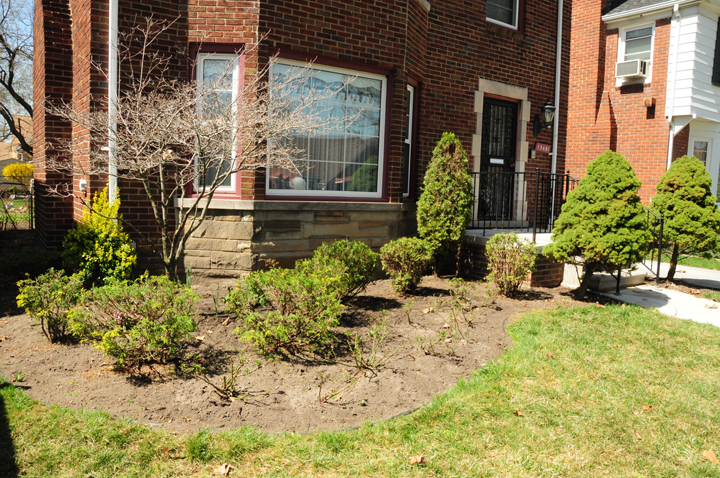 Now here they are, just cut back.

Sure, you can say "Ugh." Or you can recognize how much light is now reaching the tiny nibs and scraggly branchlets we left in the shrubs' interiors. We rely on spring's amazing power to pull lots of growth from there. 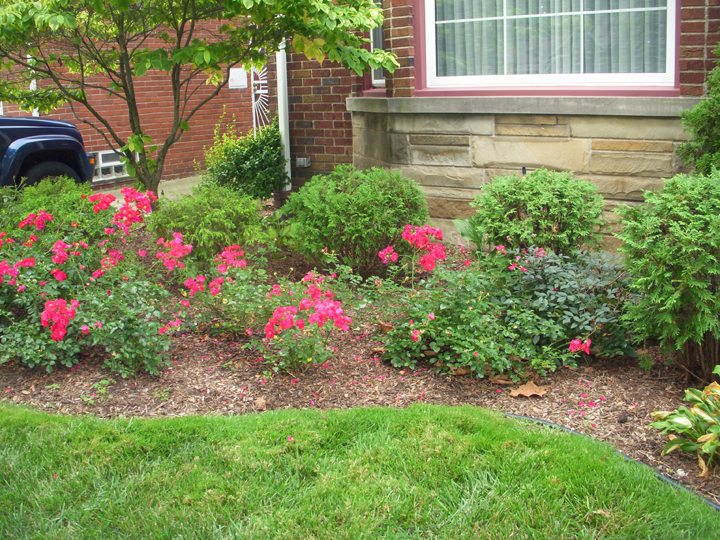 Which spring did do. Here they are 3 months later. 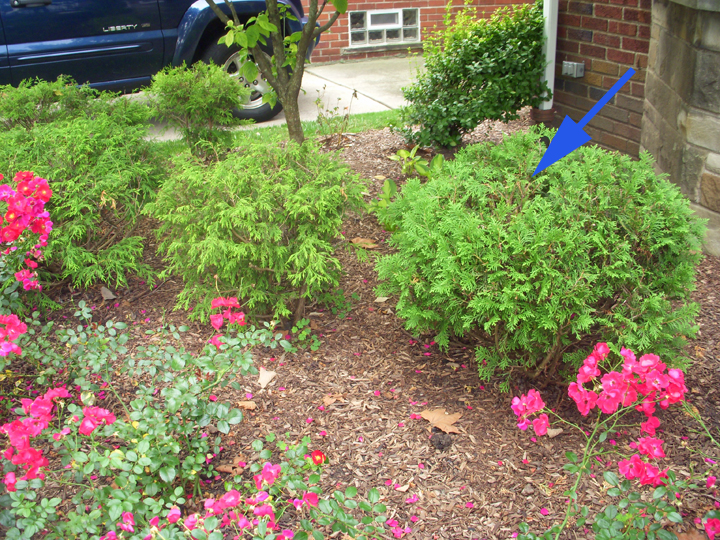 At the arrow you can see some of the bare twigs still being covered over. 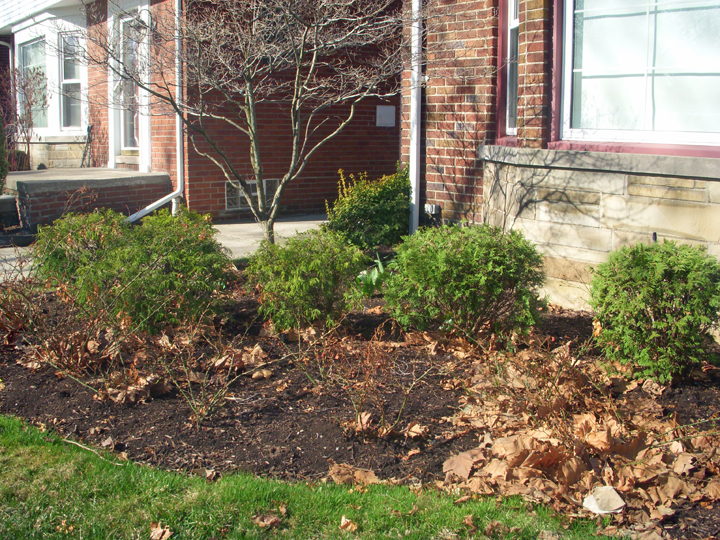 One year after the first cut, with (right) an inset of the first photo to make comparison simpler for you. 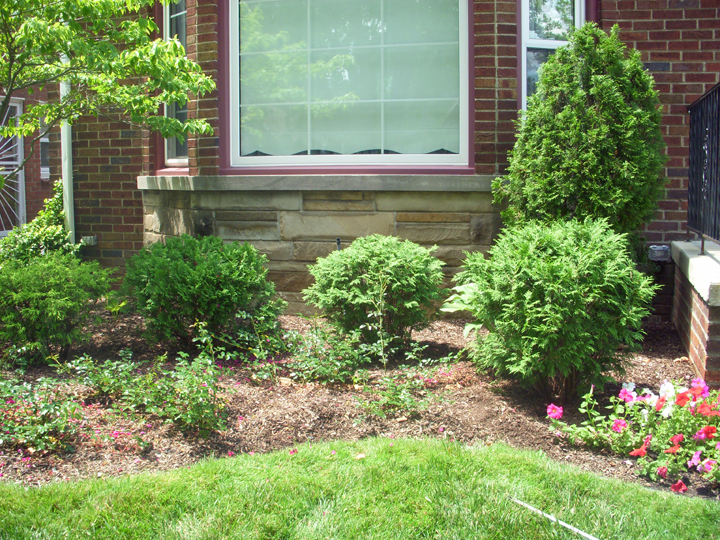 18 months after the first cut. They're ready to resume normal pruning, once every year or two in August. 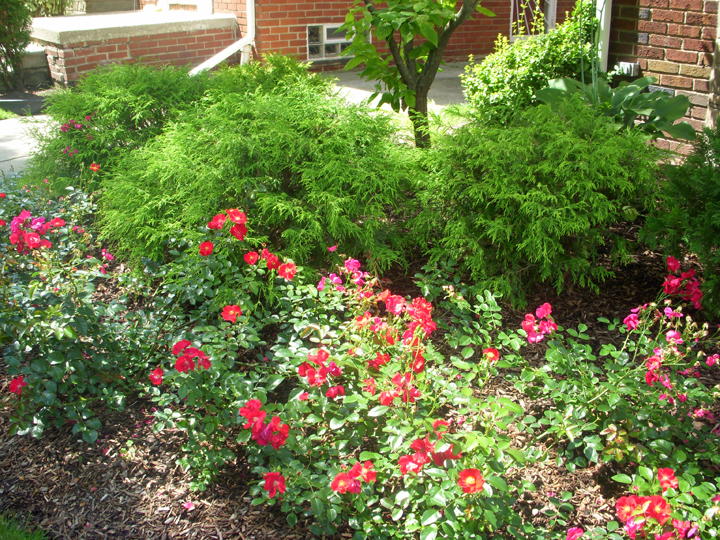 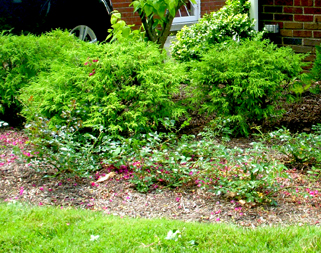 Interested in rose pruning and care? Then you may have noticed the other players in this sequence. As always in the real world, there are additional stories to be told. Of the groundcover roses' story, we can talk another time. 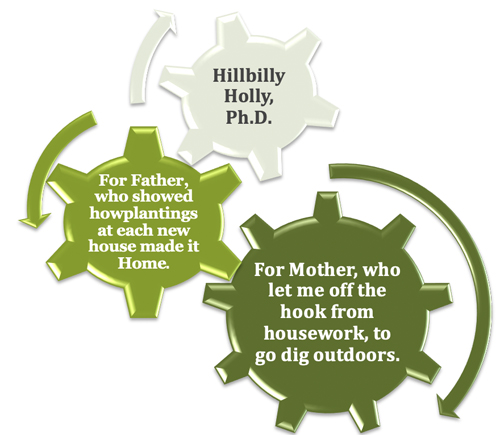