Some springs the sound of sighing heard on a calm day as you pass a golf course is not a freak wind, it's the greenskeepers. They're moaning over the condition of turf that was buried but warm for three solid months.

Lots of email this spring from you about odd stuff on the lawn. So:

Snow mold fungi turn lawns white or pink. The pink is remarkable in that you might see the color from one place but not another. C.S., for instance, saw it, walked next door to ask his lawn guru about it, and could not see pink from that neighbor's porch.

Snow mold diseases don't usually kill lawn grass plants. They kill the blades -- like a messy mowing. The problem is that the dead blades can form a thick thatch that slows the growth of live grass below or may even smother it.

Right and below: This is snow mold. Although from a distance it may have the round-dead-spots look of other diseases (necrotic ring spot, dollar spot), you won't find bare, even depressed ground beneath when you rake. You'll find live grass beneath the matted mess. Those other diseases are killers; snow mold is more of a
cosmetic embarrassment.

Even without snow, high moisture during winter can cause this problem.

Warm weather (over 60°F) and air end snow mold's run. So rake, aerate and fertilize where you see this. If it's a regular occurrence in your yard, mow the grass shorter in fall, don't use high nitrogen salt-based fertilizer in fall, and aerate regularly to improve drainage. 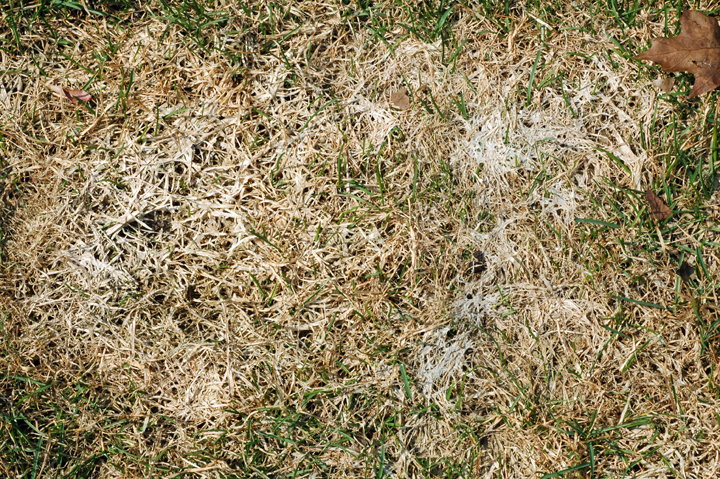 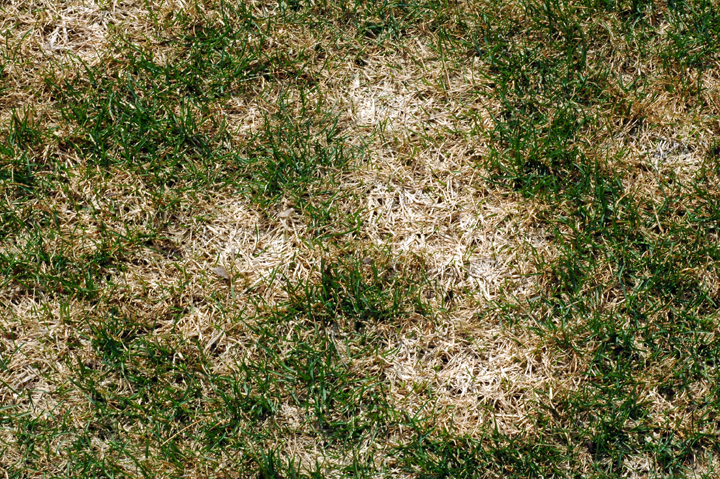 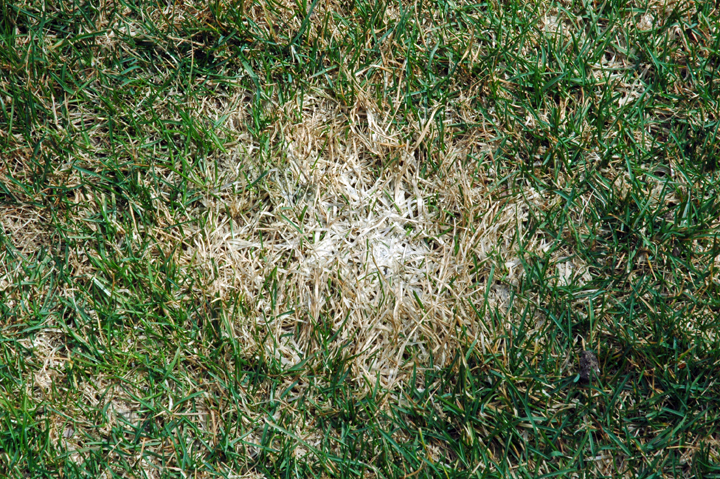 These rodents, also called meadow mice, are important winter fare for hawks, owls, foxes and coyotes. However, they can range uncontrolled in a winter with solid snow cover, foraging freely on plants under cover of a white blanket.

Below: Learn to recognize vole damage so you can head off even bigger trouble in a "mouse year." In some lighting the squiggly tracks left in lawn by these rodents may seem to be tree branch shadows. Some people figure they must have been made by deer pawing through snow. One reader thought perhaps an old garden hose had been heaped in a tangle on the lawn and decayed. 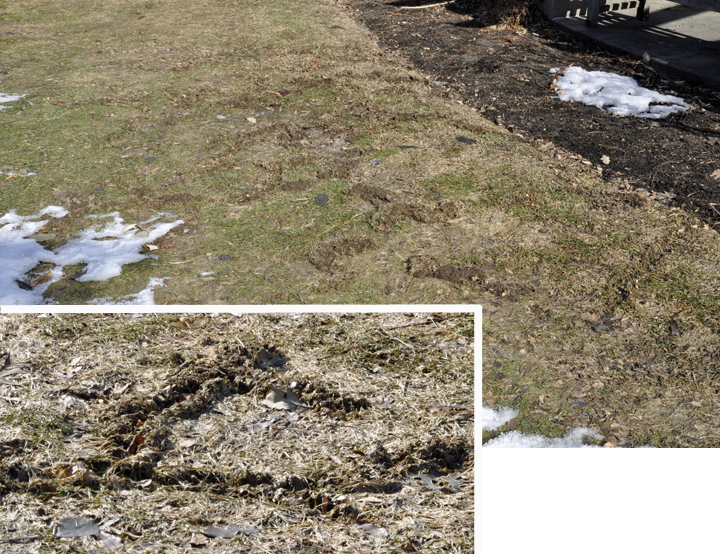 Grass is a favorite food. They eat the crown of the lawn grass, leaving meandering furrows behind. They like other grasses and can gnaw through even tough ornamental species. (We approached one big old Miscanthus one spring, dreading the chore of digging it out to divide it, only to have it peel right out. Its crown had been totally devoured from below. The old culms were still knit together but they were sliced neatly from the roots as all the growing points below were eaten.)

Other vole delicacies: Lily, tulip and crocus bulbs. Perennials with starchy crowns such as gayfeather (Liatris species) and hardy Hibiscus. The starch-rich layer of a woody plant just below the bark -- the cambium. Tiny voles can kill an old fruit tree, a whole boxwood hedge, or a treasured false cypress when they strip the bark and eat the cambium at soil level. If their chewing goes clear 'round the trunk or cane, it's girdled, a goner.

Voles multiply rapidly. Two in spring may give rise to 100 by late summer when the living is easy. A farmer may call that a "Mouse year."

If you see signs of vole damage in April, set mouse traps or baits right away. (descriptions of the best controls we've seen are in Growing oncerns 462.) If you have seen signs of them in summer, use hardware cloth to circle the bases of fruit trees, thin-barked trees and young woody plants. Use a trowel to clear soil at ground level so you can wrap the trunk at and just below ground level.

Mud pies and dirt mounds on the lawn

When the snow melted there were piles of dirt all over my lawn. Just sitting there, maybe six inches high, and eight or ten inches across. What gives? - R.R. -

Moles usually account for this. The eastern moles responsible for those annoying, ankle turning trails just under the surface of a lawn or garden are active all winter, deeper (a couple of feet down). As they dig they will push soil from their tunnels up to the surface through "chimneys" if there's no ice between them and the surface.

Star nosed moles are less common than their cousins and need moist, even swampy ground to live in so fewer people notice them. Someone with a sizable property including a wet area at a distance from the home may have star nosed mole neighbors but never see them. However, these critters will tunnel above ground in snow to forage for insects over a wider territory during the winter if the ground is thawed, snow is deep and everything is moist. (Sound like this winter? We think so; see our February report Snow happy for ice free soil. Is there a pond on your property, R.R.?)

Star nosed moles also deposit excavated soil on the surface. It's usually wetter stuff than what eastern moles throw out. Some people can tell one mound from another by the relative fluidity exhibited in its shape.

In a mild winter when the ground is workable and the surface thawed for a long time, moles can push a lot of soil up and out. You might see impressive mounds melt out of the snow.

If the mole activity took place early in winter the mounds may settle and weather to look more like cow patties than volcanoes. Soil may even filter back into the hole the mole made (which was small to begin with, maybe 2 inches in diameter), leaving a gardener scratching his or her head over mysterious soil dumps.

We take molehills as gifts of deep earth containing nutrients that have leached below plants' root zones. We rake out the soil and say "Thanks," or just accept it as the minor nuisance it is.

A winter so long we forgot we core aerated last fall

Speaking of how soil can weather under snow: The cores left by the lawn aerator last November were mostly crumbled blobs when the snow finally melted away in March. Briefly, we looked at them and wondered what mysterious animal had pooped all over the lawn.

Then we walked on those lawns and remembered. Remembered and danced a little, too, because both lawns are already so much cushier underfoot. It's amazing what a difference core aeration can make to a lawn. The soil condition improves almost magically, especially when the soil animals encouraged by all that oxygen can stay in operation right at the surface all through a mild winter. Grass roots grow so much better there that the grass is thicker, better in color and more disease resistant. 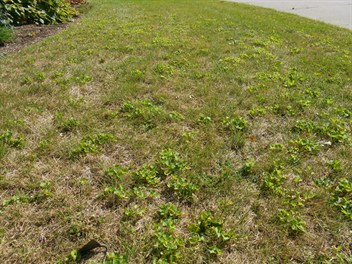 Last fall we described the answer to these Violets in the lawn. A key point in the solution was core aerating this very compacted area where lawn struggled and left patches rife for colonization by weeds. 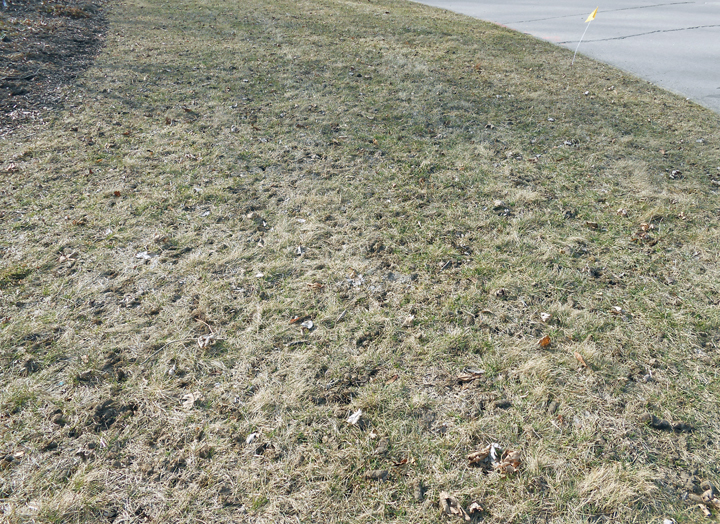 Even before the grass greened up in spring, our feet told us conditions have improved -- the feel is no longer like pavement but cushy carpet. 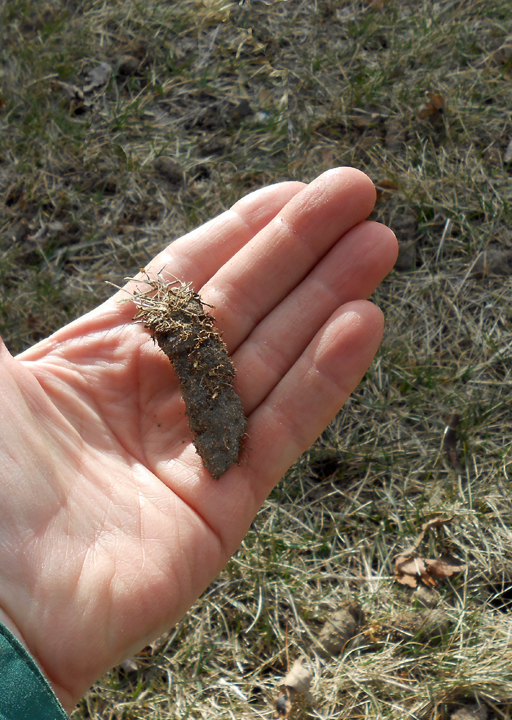 The cores the aerator machine deposited on the lawn are no longer solid but crumbling. We'll overseed and rake, and all that crumbly soil will be a welcome topdressing. 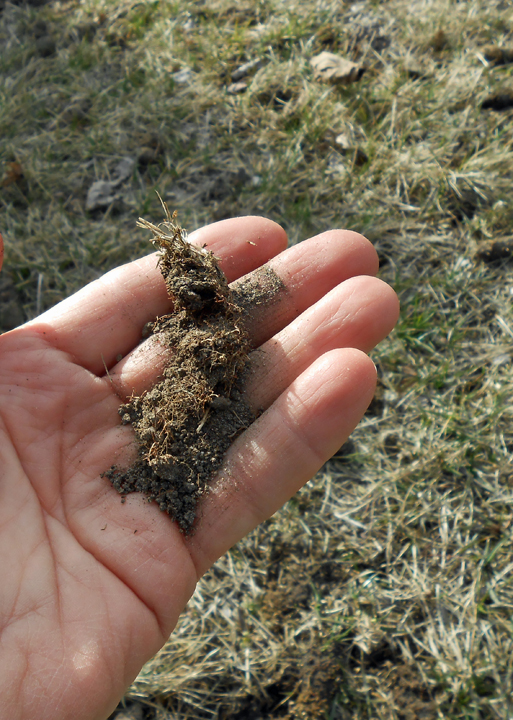