What this lethal rose disease is.

Equally important, how an average gardener may first meet it.

Rose rosette disease is a virus-like disease of roses that is becoming more and more common. We'd never heard of it when we first saw it in a client's garden in 2009 (photos below). However, when we did our research to determine what the problem was we found plenty of information dating back to the 1990's.

Want to discuss this or ask a question? We have a Forum topic you can view or join. 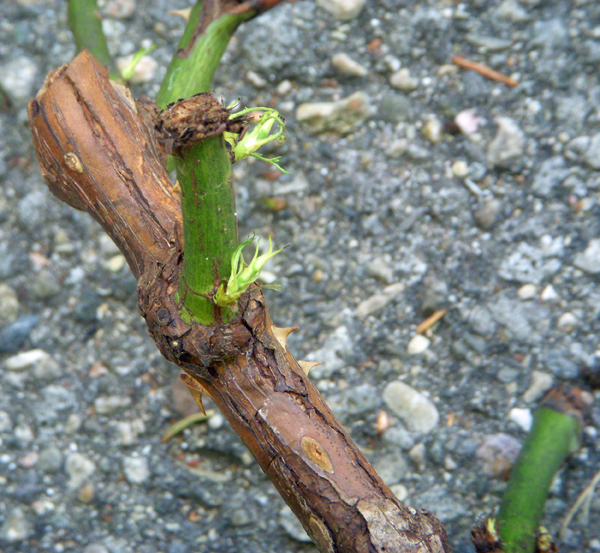 The symptoms are definitive. That is, if you see distortion and discolorations described below you do not need a lab test to confirm the disease. (Nor could such a test be arranged, as the disease has not so far or simply cannot be cultured in a lab.).

The carriers (vectors) are eriophyid mites -- microscopic critters. The mites are in each growing point, visible only with 10x power lens or stronger; if you really want to see them cut open a distorted bud under a microscope and watch for the mites to scatter.

The prognosis is and has been "lethal; usually within 2 years" and the treatment "remove that whole plant, roots and all, immediately." It can't be controlled with a miticide.

You will probably notice it one spring, if you are unlucky enough to have it occur in your garden. The new growth on your roses will be distorted -- some people call it "feathery." The summer time photos below show the same distortion in new buds without the red coloration and thickness of infected growth in the spring. Thorns may grow much more prolifically than usual, and new branches will "broom." This Rose Rosette Morton Arboretum bulletin is comprehensive and has very good photos.

If you do what others have done on first seeing this problem, you'll cut off the strange growth in spring, then watch, hoping that will take care of the problem. Here's what you may see that summer, when symptoms may be less noticeable, seem less severe, or may elude you because the rose has other problems that have become severe because the plants are weaker.

The photos here were taken in a client's garden, of a rose which we had under observation after removing a dozen roses from nearby beds that showed rose rosette symptoms that spring. We and the client hoped that the infestation was new and confined to that area of the property where we'd removed roses. (About 20 roses remained after the purge, all in mixed beds throughout the property.) The diseased roses were all established shrubs, some "old" roses, a few hybrid teas. Most had been in the gardens for a decade, some longer.

We had decided to watch this rose after we cut an unusual amount of dead wood from it in the same spring we saw rose rosette elsewhere on the property. It had previously been a very vigorous plant. We hadn't seen the distinctive new growth distortion of rose rosette but since it obviously had something wrong we thought it bore watching.

How did the disease arrive? Probably on a new rose. Since we did not recall any new roses going in the previous year, the problem may have been building for two or more years, with symptoms initially beneath our "radar." The build up may be even slower, or there is some other way these mites are being moved around. We say this because we know of three other properties where well established shrub type roses were suddenly noticed to have rose rosette disease and where no new roses had been planted for at least a few years.

A rose we've removed. Most of the growth produced earlier in the year had died back. There had been some flowering. The plant kept pushing out new shoots.

The distorted appearance of new shoots in summer. Rose rosette causes the same kind of "featheriness" in spring but with even more redness than is typical of early spring rose foliage. The shoots may also be much thicker than usual.

The shrub we'd been watching. (Janet was on camera this day and does not ever remember to compensate for glare. We apologize for that fault in the image.) If we had not been looking closely we might have missed what we show you in the next photos... 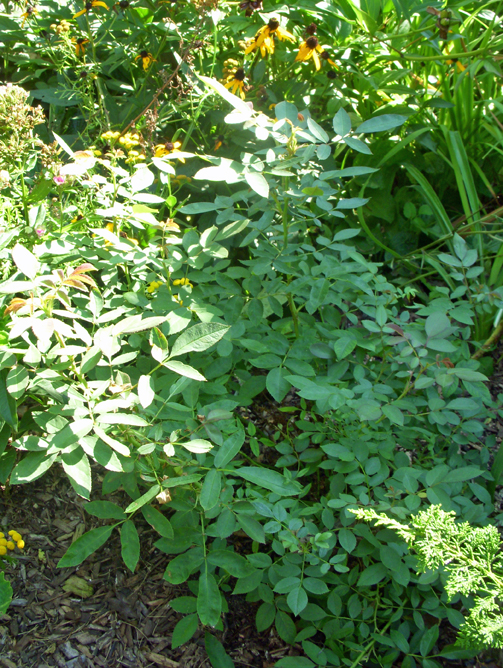 ...the new growth that's misshapen and smaller than it should be (below). 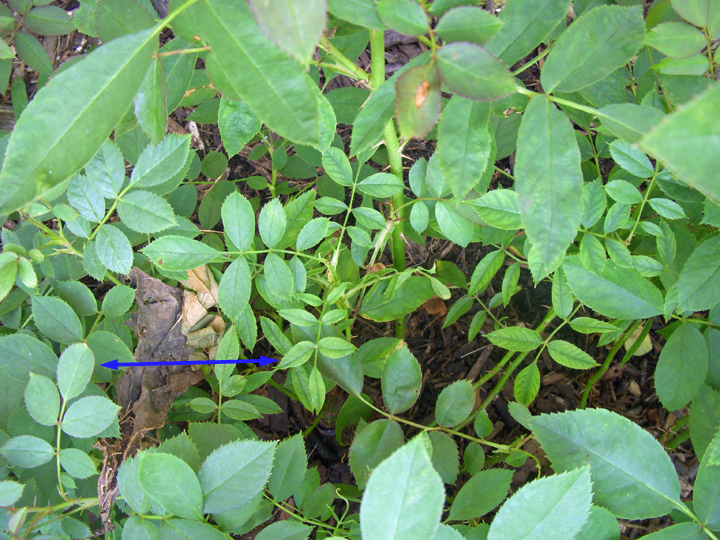 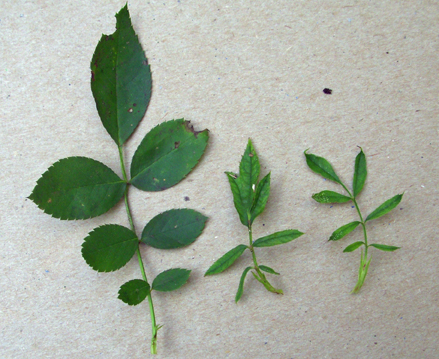 Comparing normal size foliage from one part of the plant to the puny, pale leaves from newer shoots. 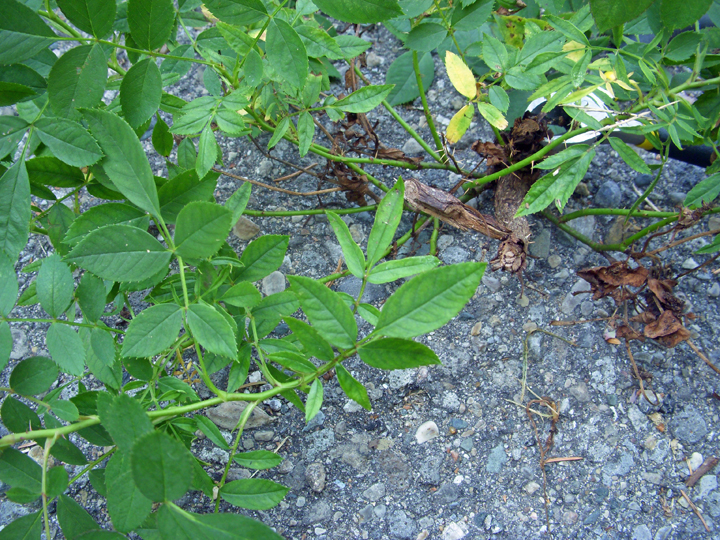 We might have thought the discoloration was just a nutrient deficiency. And might not have noticed the dead wood throughout the plant, all of it very dead. there is a dead stub in the photo below, and at A in the next photo. 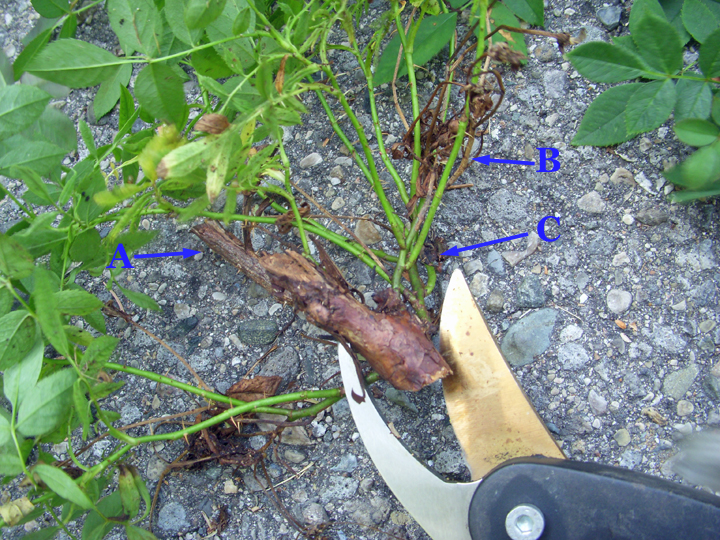 A: Dead wood. B: Earlier growth has been dying back. C: New shoots are in a witch's broom formation -- too many shoots together and those lacking rose-orderly fashion. It's a sort of wild array.

Check our Forum for current developments or search Extension publications on the Internet using the terms rose rosette disease.

If you are a Forum participant, please take this article as an example of how important your posts are on our Forum.

We posted this article when a discussion in our Forum caused us to think of this possibility and realize we had let over three years slip by without making a formal report here regarding this disease. We then created a posting on the Forum specifically for reports of rose rosette disease.