Do you think we can help my sickly Harry Lauder's walking stick? He is about 10 years old and until now has never had a sick day, but is getting some foliage loss which is not typical for the poor fellow.

What should we do? Some of the reading I have done has said this is a disease that can be controlled with some extensive pruning. Do you think this is worth a try? - J.K. -

Eastern filbert blight (Anisogramma anomala) is a fungal disease that's native to eastern North America, where it is occasionally a minor nuisance on American hazel (Corylus americana). On these shrubby native trees it may weaken or kill some branches but generally does little more than that and seems to affect only otherwise weakened wood.

However, eastern filbert blight is lethal for even a well-grown European filbert (Corylus avellana). This is the species that gives us not only the standard nut producing trees but the shrub variously called  twisted filbert, contorted hazel or Harry Lauder's walking stick in tribute to a vaudevillian actor's trademark cane. Another susceptible Corylus species is the Turkish filbert (C. corluna), being used here and there in North America as a pyramidal, drought tolerant street tree. 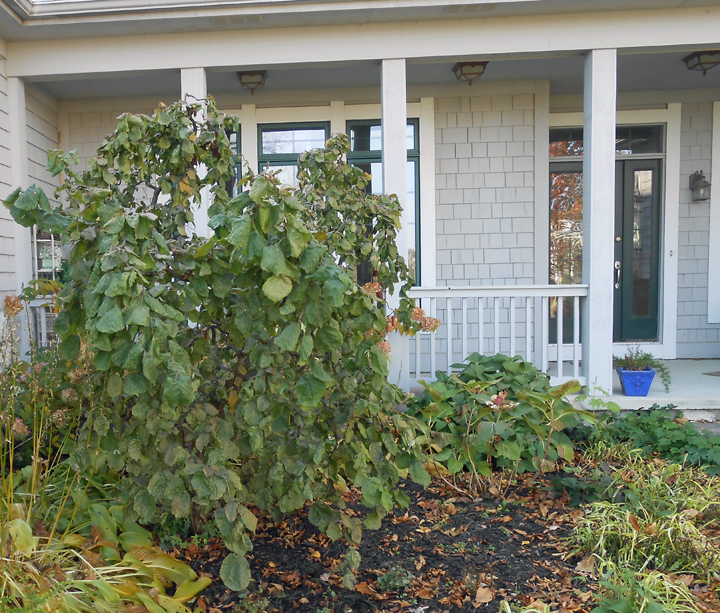 Leaf loss isn't the only sign of trouble on this twisted filbert (a.k.a. Harry Lauder's walking stick, Corylus avellana 'Contorta'). The foliage has an overall dusty, dry appearance, many branches have rows of canker wounds, and there are dead branches.

We first met eastern filbert blight 40 years ago and decided then that we would not grow the shrub anymore, attractive though it can be. The work required to keep the disease at bay just wasn't worth it for us. About the same time, the disease was jumping the continental divide and beginning to plague formerly clean Pacific Northwest nut farms. It's still a pitched battle today, and no cure, prevention or highly resistant variety has been developed even for the nut growers, despite much incentive to stave off this devastating disease, and much effort.

If there is a breakthrough in nut orchards, growers of the ornamental filbert will certainly apply it but for now they continue as before, doing the extra work to keep a crop clean until the plants reach sale size.

All this means we gardeners continue to have these shrubs as only temporary residents. Infection is just a matter of time, after which the plant has 4 to 10 years even if given special care.

On your toes year-round to control eastern filbert blight (EFB):

Inspect the hazel or filbert carefully in winter for dead and dying branches. You're looking then for the earliest telltale on the wood, distinctive rows of small elliptical eruptions. These become rows of football shaped cankers on any branch that survives the early infection.

Prune out everything dead or suspicious, cutting 2 to 3 feet below the lowest symptom since the spread is outwardly invisible and does extend that far. Clean your pruning blades with rubbing alcohol after each cut, and burn the wood or chip it small enough that all bits dry completely, quickly -- otherwise the spores live on in moist dead wood. 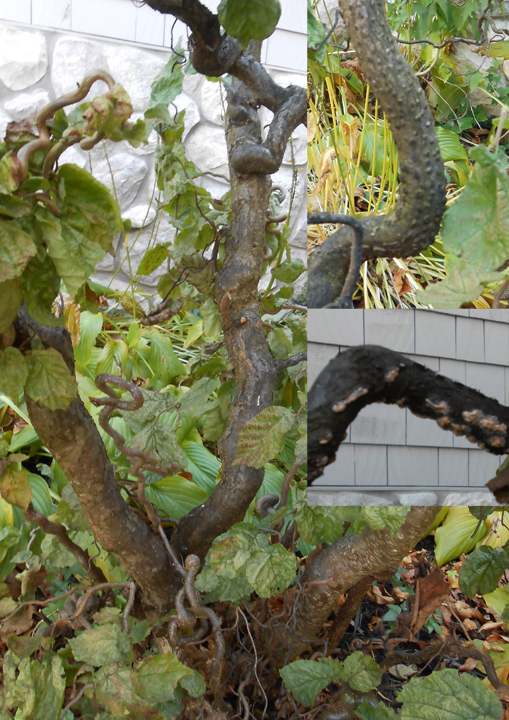 Can you tell cankered wood from clean? Look at the honey colored, smooth new branch upper left in this composite photo. Now look at older branches such as the inset, upper right in this composite. There the bark is not smooth but has rows of eruptions -- wounds called cankers. Then see that there is also dead wood with cankers that are even larger but in the same regular rows (inset lower right).

In spring, as buds break and for about 8 weeks thereafter, prune out any new shoot that wilts or fails to thrive.  (It's a watchword of all blights, that infected new growth darkens and dies suddenly as if it's been targeted by an evil spell.)

You can also give all the new shoots some protection from new infection with a fungicide or fungus barrier such as an oil or  anti-transpirant. If you use a fungicide, do not use the same product for each of the three to four applications. Switch between a copper-based Bordeaux mix and a horticultural oil, for instance.

In mid and late summer, look closely at any branch with wilted or discolored leaves. Prune as in winter.

All the while, maintain excellent growing conditions for the plant and control other problems to avoid the stress that can increase susceptibility.

What are the best growing conditions? C. avellana is an understory species that appreciates cool air, midday shade, and loose, rich, loamy soil.

Below: Signs that this shrub has an additional problem, an insect infestation. It's probably alder lace bug (Corythucha pergandei). If you decide to give blight control a try, you must also stay on top of any such insect pests to lessen stress. 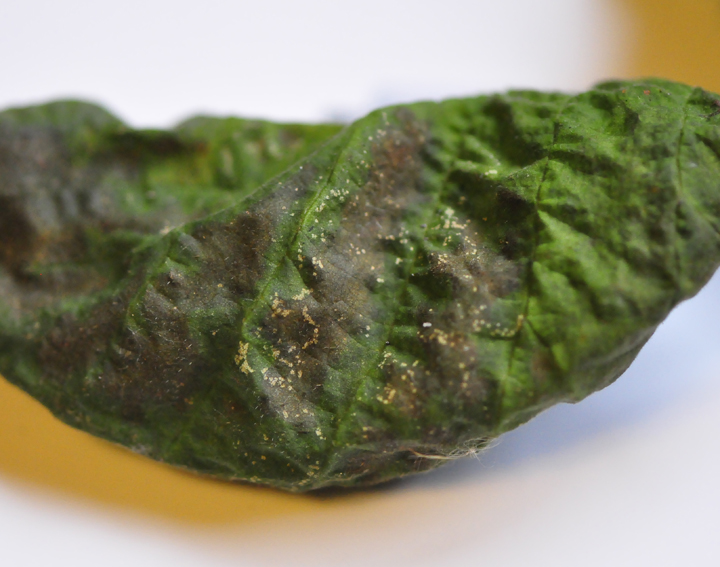 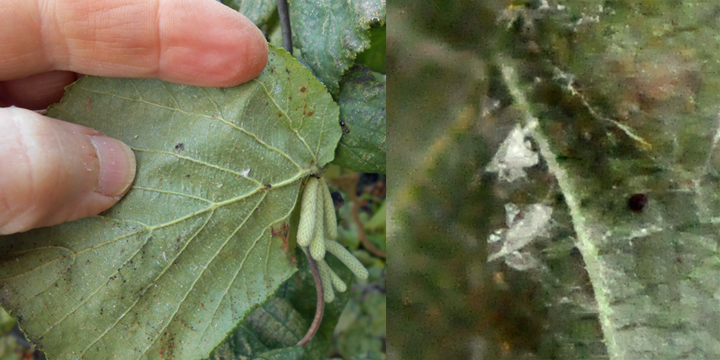 Tough regimen for the home gardener

One, we don't usually recognize the signs until the infection's too far gone. We don't look so closely at our plants as a professional grower does or we don't realize we should. The infection gives no distinct outward sign in its first year unless some new growth wilts and dies, and we're likely to consider that normal garden wear and tear. The late summer eruptions that are the first indisputable sign are small and may escape notice yet the affected wood must be removed right away before it can spread spores the next spring.

Two, we have few, if any, fungicides available to us and hiring a professional to make the application is not a simple or inexpensive thing.  (Personally, we are glad that fungicides have been greatly restricted because most provide too little to offset the risk they present to people and environments. Professionally, we recognize how this limits our disease management options. However, in accepting the challenge to operate in other ways we have been favorably impressed with alternatives, from resistant varieties to betterment of growing conditions.)

Three, effective pruning will remove so much wood that when we're done the shrub may have very little ornamental value.

Four, many gardeners  favor prominent placement for this shrub with solid background to show off its branches. That means it's often in the open or near a solid wall. The first position denies it the cool air and midday shade that's most healthful for this species. The second puts it at risk from reflected heat in summer and larger, more damaging temperature shifts in winter. 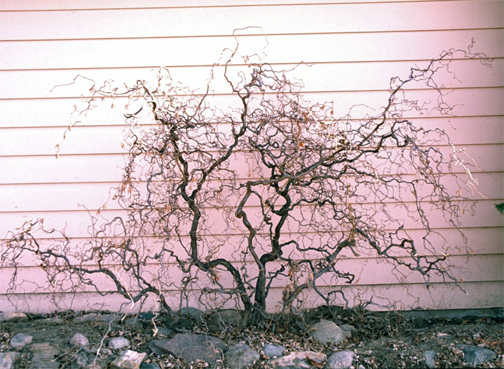 plantclinic.cornell.edu/factsheets/filbertblight.pdf
(If link fails, copy the line above to your browser bar to download the bulletin)

"The first symptoms to appear on infected trees are elliptical black stromata. They are formed in longitudinal rows on infected branches… usually between May and August… 12-18 months after the initial infection."

"Fungicides are best used to protect susceptible tissue in the spring at bud break and for the next 8 weeks. …additional applications have not resulted in significantly better disease control. …Alternating fungicides with different modes of action has been effective to manage EFB."

From Canada's Ministry of Agriculture

"In coastal (British Columbia), the spray period will generally be from late March until early May. The fungicides registered for EFB can only protect young shoots from initial infection, i.e. they need to be applied before the fungal spores land on vulnerable young tissues… The following fungicides are registered for EFB in Canada…"

"…difficult to control… fungicides …impractical in the home landscape. Pruning to remove the cankers …often requires removal of so many branches that the ornamental value of the tree is lost. …There are several resistant varieties of nut-bearing filberts but so far no resistant types of contorted filbert."