Lawn's stronger when it's several species and types

"Mixed up" is good, in grass seed

We've been shopping for grass seed and ourheads are spinning. There are three or more kinds of seed in every package. Is that right?! - L.K. -

Seed for shade and heavy traffic

In many mixes, for instance, there is bluegrass as well as fescue since each has different strengths. Fescue can tolerate more shade while the bluegrass takes heavier foot traffic. 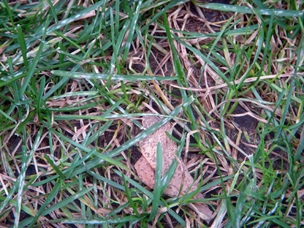 Mildew can take a toll on lawn, leaving bare spaces where weeds take hold. However, in a lawn which has several types of grass, those that are mildew resistant can be the "weeds" that move in where the afflicted grass thinned out.

Over time in a shady area fescue will survive and predominate. Once you recognize fecue's thinner blades and lighter green, you may realize the shady parts of your yard are all fescue. Meanwhile, in a sunny place where feet trod regularly, bluegrass' wide blades may be the only thing keeping that tough spot green. The bluegrass could put up with what the fescue could not.

Read the seed package label. Those that have resistance brag on it and list grasses by name.

Extension service reports are a great source of information regarding lawn varieties for a region. For instance:

Cornell University Extension's "Turfgrass Species: A description of grasses to grow in the Capital district of New York State describes major grass species suitable for most of the northeast U.S, and includes recommended varieties.

Makes one wonder why "bad grass" is out there

How weakling grasses get into a lawn and persist on the market, and how a lawn's overall vigor can compensate for them, is summed up in the tale of 'Merion' bluegrass. 'Merion' was a rave in the 1950's and 60's for its color, density, resistance to then-prevalent leaf spots, and tolerance for close-mowing. Over time, however, it showed disease susceptibility. It would thin out and let weeds get started.

So 'Merion' was largely abandoned by the best seed companies during the past thirty years as newer types with more disease resistance were developed.

Nonetheless, some seed producers still grow and sell 'Merion', since it can live up to its old hype where the growing is good. That is, if the soil's aerated regularly, it's watered during drought and treated with organic slow release fertilizers that improve the soil as well as nurture the grass plants.

Beefing up a lawn